National symbols of the Republic of Kazakhstan

The State Flag of the Republic of Kazakhstan is a  rectangular breadth of blue colour with the image of the sun in its center with a soaring steppe eagle underneath. Along the flagstaff there is a vertical band with the national ornamental patterns. The images of the sun, rays, eagle and ornament are of golden colour. The ratio of the Flag’s width to its length: 1:2.

In heraldry each colour has its own specific meaning. Thus, a blue-sky colour symbolizes honesty, fidelity and integrity. Moreover, the blue-sky colour has a deep symbolic meaning in Turkic culture. The ancient Turkic peoples always worship the Sky as their God, and their blue-sky banner symbolized devotion to Father Ancestor. The blue colour of the State Flag of Kazakhstan means pure sky, peace and prosperity, and self-colour of the background represents the unity of our country.

According to the heraldic principles the sun symbolizes wealth and abundance, life and energy. That is why the sun rays on the flag have the form of grain, a symbol of wealth and welfare. By representing the sun at its state attributes Kazakhstan reaffirms its commitment to universal values, which also indicates that the new young country is full of life-affirming energy and is open to all countries for cooperation.

The image of the steppe eagle is one of the main heraldic attributes which is used on coat of arms and flags of various peoples for centuries. This image is commonly considered as a symbol of power, insight and generosity. A soaring steppe eagle represents by itself a power of the state, its sovereignty and independence, aspiration to high goals and sustainable future. The image of the steppe eagle on the world outlook of Eurasian nomads has a special place and is associated with such notions as freedom and fidelity, sense of dignity and courage, strength and purity of thoughts. The symbolically rendered silhouette of the golden steppe eagle reflects aspiration of the young sovereign state to the heights of world civilization.

Another important element of the State Flag is a vertical band with the national ornamental patterns. This Kazakh ornament is one of the forms of specific artistic perception of world in strict accordance with aesthetic styles of the people. Representing a harmony of various forms and lines, it is also an expressive means of discovery of the inner world of the people. The national ornament along the flagstaff represents the art and cultural traditions of the people of Kazakhstan.

The central heraldic element of the State Emblem is the image of shanyrak (an arched cross-shaped top of the Kazakh yurt) against a sky blue background which irradiates uyks (supports or bearings of the yurt) in the form of sunrays to all sides. On both right and left of shanyrak there are images of mythical winged quarter horses. At the top of

Emblem there is a volumetric five-pointed star. There is also the inscription “Qazaqstan” at the bottom of the Emblem (written in Kazakh latin alphabet). The images of shanyrak, uyks, and mythical horses, as well as the inscriptions “Qazaqstan”, have the colour of gold.

Shanyrak is a main backbone part of the yurt that resembles a blue sky. It is also one of the key elements of Kazakh family dwelling in the traditional culture of Eurasian nomads. The image of shanyrak on the State Emblem of the republic is a symbol of common home and common homeland of all people living in Kazakhstan. The stable development of Kazakhstan depends on welfare of each citizen just like the strength and stability of shanyrak depends on reliability of all its uyks.

The winged mythical horses, tulpars, are the key heraldic element of the State Emblem. The image of the horse stands for such notions as bravery since time immemorial. The wings symbolize a centuries-old dream of multinational people of Kazakhstan to build a strong and prosperous nation. They represent pure thoughts and aspiration to successive and constructive development. The golden wings of racers also resemble golden sheaves of grain that are a sign of labor of the people of Kazakhstan and material welfare of the country.

Another element on the coat of arms is a five-pointed star. This symbol is used by man from ancient times and represents constant aspiration of people to the light of truth and the pursuit of the sublime and eternal matter. The image of a star on the State Emblem reflects the dream of people to build a state open to all countries of the world for cooperation and partnership. Hearts and arms of the people of Kazakhstan are open to representatives from all five continents.

The Emblem of the sovereign Kazakhstan was officially adopted in 1992. The authors of the State Emblem are Kazakhstan’s famous architects Zhandarbek Malibekov and Shot-Aman Ualikhanov.

Take a look at my country!

They did not give up their pride

My Kazakh people are strong!

As your flower I will be planted,

As your song I will stream, my country!

My native land – My Kazakhstan!

The way was opened to the posterity

I have a vast land.

Its unity is proper,

I have an independent country.

It welcomed the time

Our country is happy,

Such is our country. 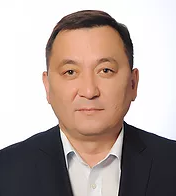